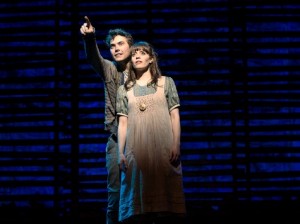 I suppose I am in the minority when I say that I didn’t really like this show.  It won five Tony awards, but to me it was predictable.  This is the typical story of Peter Pan that has been told now for over a hundred years.  It is a playful telling that takes objects found in the set of junk and turns it into the story.  I think this is a contrived concept because it has been done so much lately and the objects found are not that far fetched from what they are being used for.  For a show that won 5 Tony’s I expect more imagination and from a show like peter pan I expect all imagination.

The show was overall done well and I do want to take anything from the actors and what they brought to the stage especially John Sanders’ “Oh my God” monologue.  I guess for me I want more when it comes to this show and not found.